“Baby Boomers” is the term used today for children born between 1946 and 1965. The decades after World War Two were decades of affluence, excitement, new technology, and advancements. Television opened up the world. Transcontinental flights became more common for ordinary people. Men walked on the moon!

The population of Stratford grew quickly after the young people returned home from the war. Marriages and families put on hold because of the conflict soon began. This new generation swelled the churches where their parents were raised. It wasn’t long before buildings grew too small and decisions had to be made.

At Parkview, plans had already been made to build a sanctuary in the lot to the south of the Sunday School building when it was erected in 1929. But these plans were not in any concrete form – they were really just dreams of expansion. For a while the improvements made to the worship space in the early 1950’s seemed to satisfy the need for change. The original members of the ease end Sunday School remembered the dream however.

Another building committee was formed in 1959 and Parkview was back to work again. With the encouragement of the minister at the time, Rev Merrill Ferguson, they petitioned Perth Presbytery for permission to build an addition containing a sanctuary, lounge and office space. They proposed to pay for this venture by using 100 certificates of loan, borrowing $15,500 from the congregation at 6% interest. They also wanted to borrow $11,010.40 from the Presbytery Extension Fund at 3 1/2%. The rest of the funds would come from a bank mortgage and fund raising. In 1961 Presbytery approved this plan and the excitement began!

This new addition was to be constructed by Logan Construction Ltd of Stratford. Plans called for a 400 seat sanctuary, church office, choir rooms, vestry, lounge, and other accomodation. The highlight of the architecture would be a 62 foot tower with a cross, proclaiming to the community that this was a Christian edifice. The first ceremony was held on the front lawn on August 20, 1961 with 300 members and guests attending. The cornerstone for the new building was laid in a second ceremony on November 26, 1961. By the time the fundraising was completed and the dust had settled from construction, the total cost of the building, furnishings, cross tower, and outside lighted sign was $101,591.42.

Dedication of the finished addition occurred on Wednesday March 7, 1962 at 8pm. It began with a loud knocking on the sanctuary doors, representing the “knocking by Christ on the door of the human heart”, by the Chair of Presbytery. During a service full of symbolism, keys were passed from hand to hand by those participating until the minister laid these keys upon the communion table, indicating that the building was open and ready for dedication.

Another “burning of the mortgage” took place on Sunday May 7, 1972. These “people of God” had worked very hard to clear themselves of a huge debt in just 10 years!

The cross tower, erected in 1961 with the hope it would serve as a sign of the gospel being preached inside, was not as permanent as first thought. One windy day in March 2007 the tower crashed to the ground, taking a large tree with it.

The most recent addition to the building occurred on January 4, 2009 when a large lighted cross, installed on the surface fronting Ontario St, was dedicated. Paid for with money from the closing of Centennial United, this cross caused much talk in the city. Parkview United, contrary to some rumours at the time, was alive and well and worshipping with excitement and passion. 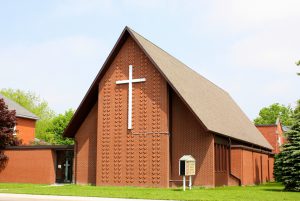 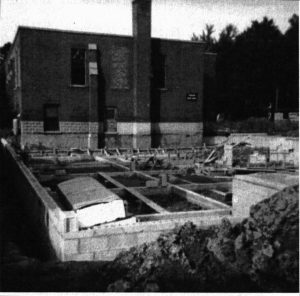