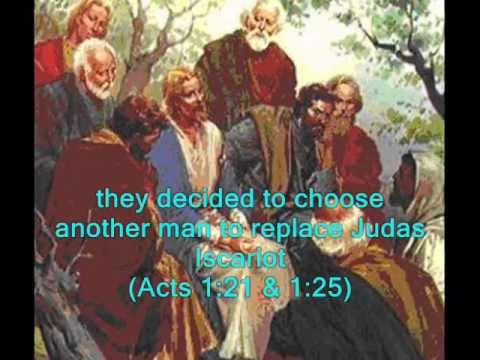 Sermon: Are You Chosen?

Have you ever been disappointed about something? Something which really meant a lot to you? Maybe you were after a job and you didn’t get it? Or a relationship you’re in, or after – a girlfriend, boyfriend or spouse tells you they don’t want to be with you anymore? Or maybe you had your heart set on a particular purchase like a house or a car, and you really want this, but someone else is ahead of you and you don’t get it? We can have little or big disappointments in life, but the really crucial disappointments are usually the things which matter the most to us.

There is a story of Fritz Kreisler (1875-1962), a world-famous violinist, who earned a fortune with his concerts and compositions. Before he became famous, he discovered an exquisite violin on one of his trips, but he didn’t have enough money to buy it. Later on, having raised the money to meet the asking price, he returned to the seller, hoping to purchase the beautiful violin. But to his great dismay, it had been sold to a collector. Fritz Kreisler made his way to the new owner’s home and offered to buy the violin. The collector said it had become his prized possession and he would not sell it. Keenly disappointed, Fritz was about to leave when he had an idea. “Could I please play the instrument once more before it is consigned to silence?” he asked. Permission was granted, and the great virtuoso filled the room with such heart-moving, beautiful music that the collector’s emotions were deeply stirred. “I have no right to keep that to myself,” he exclaimed. “It’s yours, Mr. Kreisler. Take it into the world, and let people hear it.”

The gospel – the Good News of Jesus – is like beautiful music, not meant to be kept silent. When Jesus walked the earth, he chose twelve disciples to take his message out into the world. The disciples were called to be witnesses to what they had seen. They were with Jesus throughout his entire ministry, and they were commissioned by Jesus to spread the news of who he was, why he came, and the salvation he brings to all humankind. The exciting news of Jesus spread as the disciples and apostles talked and testified about the things they had witnessed.

What is the difference between a disciple and an apostle? Disciple means a student or a follower who learns from a specific teacher, or Rabbi in Jesus’ time. The disciples of a Rabbi are associated with that Rabbi. The twelve disciples were the close followers and learners of Jesus, their Rabbi. An apostle is a messenger sent forth with news. The word apostle means “one who is sent.” After the twelve disciples are sent out by Jesus to spread his messages, they are referred to as apostles.

In our scripture reading in Acts this morning, we see the choosing of a twelfth disciple to replace Judas Iscariot who had betrayed Jesus; Judas had died, committing suicide in his remorse. The eleven original disciples feel compelled to find a replacement for Judas, but there is a prerequisite: this newly-appointed disciple had to be a follower of Jesus, who had been with him right from the beginning, someone who had witnessed Jesus’ baptism, his ministry, death, resurrection and ascension. As Peter says (vs. 21): “…it is necessary to choose one of the men who have been with us the whole time the Lord Jesus went in and out among us…” And, we are told, there were two suitable candidates who had been with Jesus from the early days, Joseph called Barsabbas, and Matthias. They had the experience, the learning and the character to become the twelfth apostle.

The method of casting lots in biblical times was usually this: names were written on small stones and shaken up in a jar. The first name to fall out was the person chosen. The disciples prayed to God, and they asked the Lord to choose. They prayed, “Lord, you know everyone’s heart. Show us which one of these two you have chosen.”

The jar is shaken and Matthias’ name tumbles out. I wonder how he felt? And thinking about disappointment, I found myself wondering how Joseph felt? Why was Matthias chosen over Joseph? Was Matthias seen as “better”? Was there favouritism at work here? I don’t think so. I think it was a matter of Matthias having the right gifts to do the specific jobs he was called to do. God knew the qualifications for the tasks, and God knew the qualifications Matthias possessed. Was Joseph cast aside? No. God and Jesus would know the work they had in mind for Joseph to do. And this brings us to our Romans scripture reading this morning. We have listed for us several gifts of the Holy Spirit which are bestowed on each and every one of us to do God’s work. We are to fulfil Christ’s work in the world and God has equipped us to do so.

It is crucial for us to grasp that Christ calls us, today, to be his faithful apostles. We are to witness for him. Imagine your name written on one of those stones in the jar, and your name comes out first. Would you be ready and willing to say: “Yes, Lord, you have chosen me. You have affirmed me as having the gifts necessary to carry on your ministry.” Would you be ready? Willing?

And in the same way Peter knew they had to choose someone who had accompanied Jesus and witnessed his resurrection, we have to consider this prerequisite for ourself:

– A Christian is someone who doesn’t just know about Jesus, but who knows Jesus. Jesus is real to you, a living presence. You have met the risen Lord. You live day by day with Jesus. He is Lord of your life. You have committed your heart, your soul, and your life to Jesus, your Lord and Saviour.

Do our lives witness for Christ? Are we, Christ’s apostles, witnessing to him in our neighbourhoods, our community, our nation, our world, our city, our Parkview church? Do we actively speak for Christ?

Quiet Meditation Time: Is Christ real to you? Where is Christ calling you? If Christ were sending you out today, where would you feel led? What do you feel called to do?

Let us take time to meditate.